A to Z Challenge – travels round Leicester with my camera No 6. 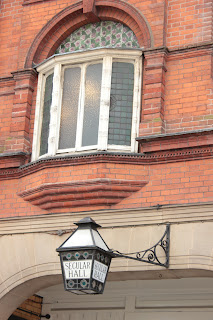 Not all acts of philanthropy in Victorian Leicester were motivated by religious faith. By the mid nineteenth century a Secular movement had emerged out of political, social and religious radicalism. Leicester had rapidly expanded from a market town to a major industrial city and had a strong reputation for radicalism.

The chief advocate of secularism in Leicester was the industrialist Josiah Gimson (1818-83). Together with his brother Benjamin he was the owner of a successful engineering firm in the city. Gimson and Company was one of the largest employers in the city and prided itself on being a model employer. In 1877 Josiah was elected as a Liberal councillor in the ward of West St Mary’s.

During the 1850s the Gimsons began attending meetings of the Secular Society in Leicester. However as time went on it became increasingly difficult for the society to hire rooms. They were often attached to churches. Rooms in pubs also became impossible as the clerical authorities were able to put pressure on landlords by refusing to renew their licences. In 1873 Josiah Gimson proposed that the Secular Society build their own hall.

The hall was designed by the architect W. Larner Sugden, of Leek in Staffordshire who was a friend of the artist and designer William Morris. Opened on the 6 March, 1881, it is situated in Humberstone Gate. After Gimson’s death in 1883 the family remained closely involved with the movement. His fourth son Ernest, became a designer and architect and was a significant figure in the Arts and Craft movement.

Along the façade of the building set in aedicules above the ground floor are five terracotta busts depicting notable free-thinkers, designed by Ambroise Louis Vago. Starting at the top left hand corner and going clockwise they are:

Robert Owen (1771-1858), Montgomeryshire born socialist and philanthropist. Was instrumental in bringing about the 1812 Factory act and founding the co-operative movement.

Thomas Paine (1737-1809), a Quaker and political writer, he supported the revolutionary cause in America. Author of ‘The Rights of Man’.

Voltaire (1694-1778), French philosopher and writer whose ideas prepared the way for the French Revolution.

Jesus Christ, included for his principles of charity, sincerity and humility rather than a belief in his divine nature. When the hall opened, the inclusion of Christ was very controversial and was widely condemned from the pulpit and in the press.

Socrates (496-399 BC), Greek philosopher. Regarded as one of the founders of Western Philosophy.