A to Z Challenge – travels round Leicester with my camera No 1.

Today is the first day of the A to Z Challenge. Over the coming month I’m going to share some of the photos that I’ve taken around the centre of Leicester recently. It has given me a chance to really get to know my adopted city and although it has distracted me from the writing, I’ve enjoyed researching the stories behind the pictures. Sometimes it’s good just to look at familiar things with a fresh eye – something writers struggle with when faced with trying to edit their work. I know I do.

I thought I’d begin with some angels. 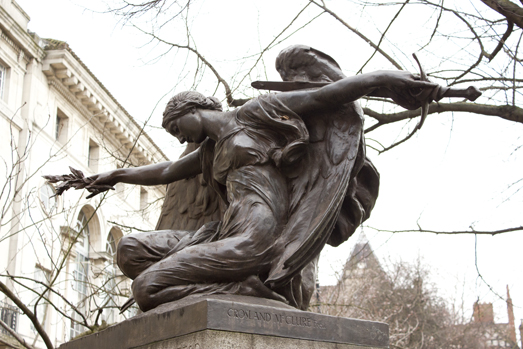 When the Boer war ended in 1902 a group of leading citizens formed a committee to collect subscriptions for a memorial to the men of Leicestershire who’d died in the war.

Their first choice of sculptor, Alfred Gilbert, proved disastrous. After five years and with £950 of subscribers money spent, Gilbert only managed to produce a rough model. In 1908, McClure, a Manchester born sculptor then teaching modelling at Leicester School of Art, was recommended to the committee and after a further appeal for funds the memorial was finally realised in 1909. Sadly, just five years later Britain was at war again. 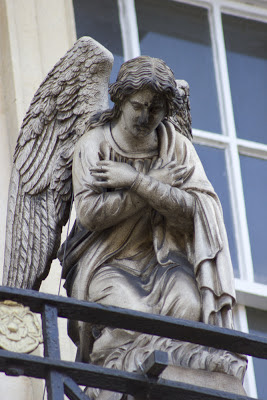 This angel sits on a little platform bidding her time (Dr Who fans will know what I mean). This building in High Street was built in 1903 for the Leicester Branch of the Birmingham and Provincial Bank. In 1921 it was sold to Commercial Union and their name can still be seen on the front. It is now Café Bruxelle.