A to Z Challenge – travels round Leicester with my camera No 4.

Francis ‘Tanky’ Smith was a detective in Leicester’s newly created police force in 1836 where he acquired a reputation as a master of disguise able to infiltrate the town’s criminal gangs. After his retirement from the force in 1864 he became the city’s first private detective. His fortune was made when he was hired to find James Beaumont Winstanley, the High Sheriff of Leicestershire, who had gone missing on a European tour. Smith tracked Winstanley to Koblenz where his body was found in the River Moselle. 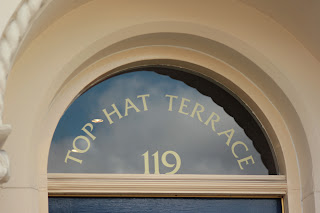 Smith used some of his fee to build Victoria Terrace on London Road, employing his son James Francis Smith as architect. The building became known as Top Hat Terrace as it was adorned with carved heads representing Smith in some of his many disguises.

The nickname ‘Tanky’ is said to refer to his habit of tapping or ‘tanking’ disorderly people over the head with his stick.

Smith seems such an eccentric character. I can imagine him as the hero of a series of Victorian who-dun-its, donning a new disguise each time to solve some dastardly crime.