After my encounter with the DeLorean (see my last blog) I came across another unusual vehicle whilst wandering about the town this week. It’s a 1911 tower wagon that once belonged to Leicester Corporation Tramways. It’s normally to be found in the Abbey Pumping Station Museum where it’s lovingly cared for by a team of volunteers, however it was in the town centre to help see off Leicester’s bid to become City of Culture 2017.

Apparently Leicester rock legends Kasabian later made a surprise appearance at the festivities but I didn’t wait around long enough to see them. 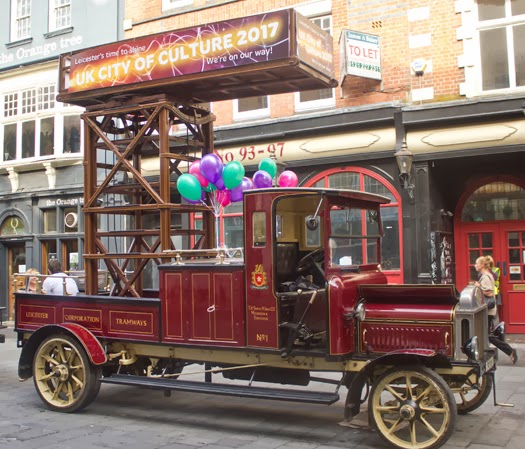 I thought I might include some pictures of the Abbey Pumping Station I took one overcast day earlier in the year.

The pumping station was opened in 1891 to pump Leicester’s sewage to treatment works at nearby Beaumont Leys. It closed in 1964.

The pumping was done by four beautifully decorated beam engines which were built in Leicester by Gimson and Co.